Skyrocketing land values are pricing affordable developers out of N. Va. — but Fairfax Co. may have a solution 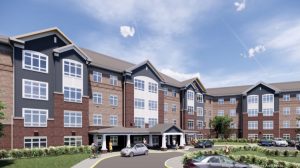 The Arlington Partnership for Affordable Housing was able to make a 108-unit project work near Van Dorn Street Metro station, thanks to a land transfer from Fairfax County. That strategy could make additional projects possible. Grimm + Parker Architects

David Levine’s small affordable housing nonprofit has spent years acquiring and rehabbing properties along Fairfax County’s Richmond Highway corridor. But those days may be coming to an end.

Levine, the president and CEO of Good Shepherd Housing and Family Services, says property values in the area have started to rise beyond what his group can reasonably pay. This southeastern section of the county has historically been one of the most affordable parts of the affluent county, but even over just the last few months or so, Levine has noticed a real shift.

“We’ve seen two-bedroom condos that, before, might’ve gone for $150,000 or $160,000, where the asking price is now over $200,000,” Levine said in an interview. “These prices are just at astronomical levels. It makes it difficult for us to find something we can afford to purchase anymore.”

Levine certainly isn’t alone. Good Shepherd may be one of the smaller players in the region’s affordable space — the nonprofit manages or owns 108 units around Fairfax County — but even more established developers are starting to have trouble buying properties in Northern Virginia. It may not be breaking news that land is expensive in Greater Washington, but affordable builders are growing increasingly alarmed that prices are rising even in traditionally cheap locations, making their complex financing arrangements ever more untenable.

“We’re competing not just with developers in town, but with national and international investors who see this as a prime landing place for their dollars,” said Carmen Romero, the new CEO of the Arlington Partnership for Affordable Housing. “The prices for existing multifamily have really been increasing, with cap rates that just seem incredible. We’re thinking, ‘How can you be paying those prices?’”

And with Amazon.com Inc. only just beginning to bring thousands of highly paid workers to the region, land prices don’t look likely to fall.

That’s why efforts by local governments to transfer land to these developers are beginning to look increasingly crucial to addressing the region’s affordability crisis. Fairfax County, in particular, has begun embracing the strategy, with commitments of public land that often far exceed the value of any loan the county could offer through an affordable housing program.

It may not be a panacea, particularly for the area’s smaller localities, but it could be an important model for others in Northern Virginia.

John Welsh, vice president for multifamily with the nonprofit developer AHC Inc., is still kicking himself over some of the deals he’s lost out on.

Take one property he pursued near Reston Town Center, for instance. AHC made it to the best-and-final-offer stage, had an interview with the sellers and just needed to take the next 45 days to complete its due diligence of the site. But another bidder swooped in with an all-cash bid, offering to take 10 days to study the property and close in 30 days.

“It’s tough for us to compete with that,” Welsh said.

Reston has long been a pricey market, though, even before the Silver Line’s arrival started spurring new development. Welsh said the more worrying trend has been in areas that haven’t traditionally been prime spots for new development.

He noted that one property AHC is pursuing in Loudoun County has an asking price close to $100 million. Land for data centers or massive single-family estates might normally command that sort of dollar figure, but Welsh said he’s never seen multifamily properties reach that level in the county.

“The price per unit at the rents they’re charging, it just shouldn’t be that expensive,” Welsh said.

He’s seeing cap rates at 4% for projects in the county, a return on investment that just can’t make the math work for a nonprofit looking to keep a building affordable or build new affordable units. Welsh expects the impending arrival of Metro’s Silver Line in the county is a factor, but he chalks a lot of the issue to the region’s sudden attractiveness to major institutional investors like Blackstone.

“When you see someone like a WashREIT getting out of office to focus on buying apartments, that’s the sort of thing that drives up prices,” Welsh said.

Levine observes a similar trend in his neck of the woods. Richmond Highway has undoubtedly seen new investment due to the county’s ambitious plans for a bus rapid transit system along the corridor, but he doesn’t discount the Amazon factor either. He said he’s already heard of several of the company’s HQ2 workers buying properties near the units Good Shepherd manages, traditionally places where such highly paid employees haven’t been looking.

“A lot of cash buyers have been coming into this market,” Levine said. “They can just pick up units at a top-dollar number.”

Those troubling trends make a partnership with government all the more attractive, Romero said.

“What out-of-town money can’t do quickly is build community, build trust with elected officials and others,” she said. “We can take a surface parking lot or something and go through a public-private partnership to achieve deeply affordable housing.”

Michelle Krocker, the executive director of the Northern Virginia Affordable Housing Alliance, observed that a piece of public land can change the math of an affordable project right away, helping a developer reduce the subsidies it relies on to make a deal work (or allowing it to reach much deeper levels of affordability).

And Romero said Fairfax County has been aggressive about finding these opportunities, recently sending her nonprofit some underutilized land near the Van Dorn Street Metro station to make a 150-unit project possible. McKay said he’s directed county staff to compile regular lists of county-owned properties that could be transferred to Fairfax’s Redevelopment and Housing Authority for such a purpose — recent efforts have centered on building housing on the county government center’s parking lots, for instance — and he’s constantly searching for opportunities to co-locate housing with new government facilities.

So far, he thinks those efforts are paying off. Nine land deals either underway or slated for completion have generated more than 1,600 affordable units in the county, Krocker estimates.

“It’s always great to have the county put financial resources into the game, but there are plenty of ways to add value without cash,” McKay said.

Romero is enthusiastic about the county’s ability to pair that land-transfer strategy with Metro’s renewed emphasis on developing its own land (particularly with Amazon stepping up to provide loans to affordable projects around stations). New joint development deals could be possible on land at the Huntington and Braddock Road stations, for instance, or the ongoing effort around the West Falls Church station could be ripe for new investment.

She said places like Arlington or Alexandria will have a harder freeing up such land to send to affordable developers, simply by virtue of their smaller size. But it’s hardly impossible, and definitely indicative of the creative solutions localities can find to confront a land-value problem that isn’t going anywhere anytime soon.

“We’re at hundreds of thousands of units less than we need right now,” Welsh said. “And until that changes, the prices are going to reflect that.”

For more information, check the original article from the Washington Business Journal.