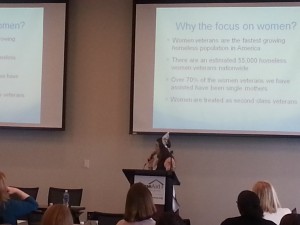 Until 2011, neither the Veterans Administration nor HUD collected data on the total number of homeless female veterans in the population. It was long overdue. According to the most recently tabulated numbers in 2015, 55,000 female veterans are homeless nationwide — where 70 percent of them are single mothers.

Please see the photo of Captain Turner from the conference. (She is the one with the tiara and the sash at the lectern.)

I mentioned in a previous update that we have nearly a half dozen families headed by female veterans residing in our housing. One of these families was referred to us by Final Salute, a local agency dedicated to helping homeless female veterans. (It is also the charity supported by the Ms. Veteran America organization).