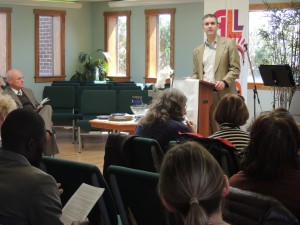 At the Ventures in Community (VIC) April Meeting, we heard a summary of the 2016 Annual Homeless Count (aka the HUD “Point-in-Time” Survey) from Dean Klein, the Director of the County’s Office to Prevent and End Homelessness.

I had reported in a previous weekly update that the homeless count numbers had improved. In particular, since 2008, homelessness in the County has decreased 42 percent. Here’s a photo of Dean in the sanctuary of Rising Hope United Methodist Church.

What struck me in the numbers was one feature of singles vs. family homelessness. For the homeless single adults (482 counted), only 28 percent were employed; while for the homeless persons living in families (577 counted), 66 percent were employed. So, in short, homeless singles are experiencing disabling conditions keeping them from housing and employment; while homeless families are largely working, but are experiencing economic impacts keeping them from housing.

None of this should be generalized too much.

But more than just the economic downturn, as one economist said, the Great Recession was “particularly deep and costly… because it was driven by debt, particularly housing debt.”

Working families had their homes taken away by foreclosures. Alternatively, renter families lost their housing when the owner of their rental housing fell behind on the mortgage — and the owner’s house was lost to foreclosure.

And so this cycle escalated, resulting in even greater numbers of working families experiencing homelessness. Families took the brunt of it; they got the short stick when it came to the housing market.